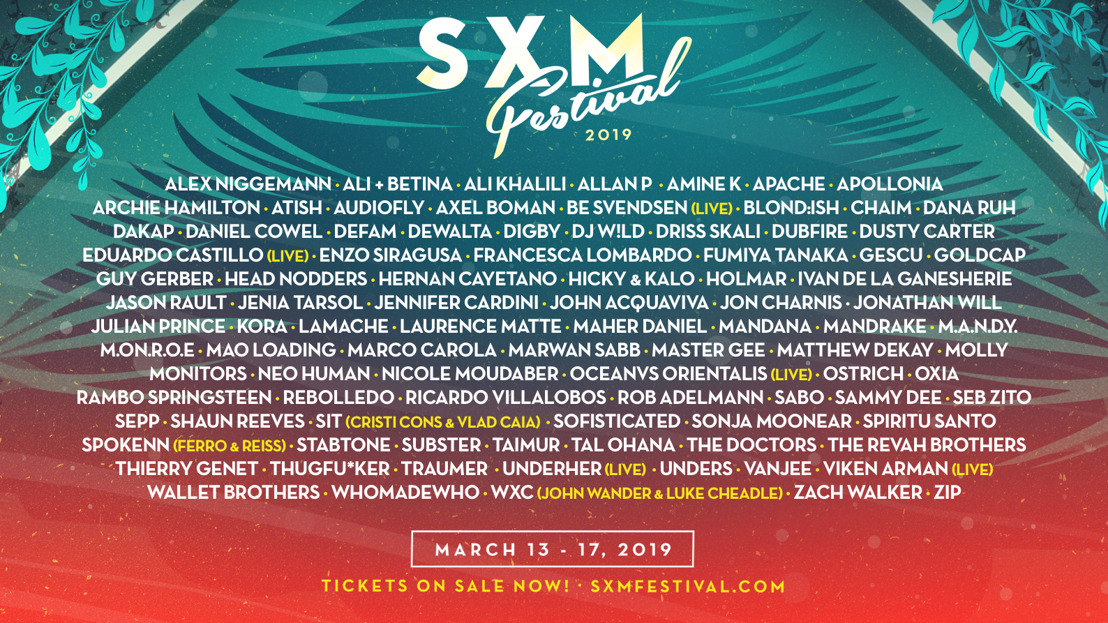 SXM Festival has furthered its reputation as a hub for the global electronic music community by involving some of the world’s most renowned party brands for this year’s edition. As a nod to its Burning Man influences SXM welcomes deep-playa art car impresarios Mayan Warrior, the iconic pyramid of The Kazbah, leading day party soundcamp Pink Mammoth, and Burner house haven Monkey Love. The event’s link to the European underground will be showcased by the decade long reign of Enzo Siragusa’s Fuse London, Audiofly’s Flying Circus, Amsterdam’s The Garden of Babylon and VBX, DJ W!LD’s Parisian club night Daily Cid, and roaming intergalactic party-place Drums. SXM will also host events by NYC’s Zero and Stranger Than, Chaim’s Blue Shadow, Montreal’s (( Stereo )) and more key partners.

It remains the festival’s integration with Saint Martin/Sint Maarten’s range of beautiful venues that makes it a truly inimitable electronic music experience. The SXM journey flows between secluded beach parties at the Happy Bay mainstage, into intimate soirées at jungle locales and private villas, through to late night club triumphs at Refuge and Lotus, and of course legendary sunrise celebrations beachfront at Layla’s. More info on SXM Festival 2019’s venues here xxlinkxx

The SXM Festival experience is known for its sense of immersion and adventure, guiding attendees through a journey of artistic wonder and cultural connectivity. Each venue is adorned with organic production elements that appear as though to grow from the very island environment in which the event is hosted. Following the devastation of Saint Martin/Sint Maarten by Hurricane IRMA in 2017, aesthetic curation has been reimagined to incorporate the debris created by the storm in order to minimize the importing of materials. By using recycled and reclaimed wood sourced from the area, the event continues its legacy of producing stages and art in harmony with the local habitat.

It is with a world-class musical lineup combined with the magical fusion of professional party-people from around the world that SXM Festival rises for its most anticipated edition yet.

For Tickets and More Info on SXM Festival Visit: www.sxmfestival.com

The Garden of Babylon